Can the products I produce be Carbon Neutral?

According to the The European Parliament, Carbon Neutral is defined as “having a balance between emitting carbon and absorbing carbon from the atmosphere in carbon sinks. Removing carbon oxide from the atmosphere and then storing it is known as carbon sequestration. In order to achieve net zero emissions, all worldwide greenhouse gas (GHG) emissions will have to be counterbalanced by carbon sequestration.” Carbon sink is any system that absorbs more carbon than it emits.

This tells us that if we manufacture a product and we can create carbon sink equal to or greater to the carbon produced during the production of your product, then your production cycle will be carbon neutral.

There are natural carbon sink elements like soil, forests and the ocean that absorb carbon. It is estimated that these natural sinks absorb between 9.5 and 11 Gt of CO2 per year however global carbon emissions have been in the region of 38 Gigatons during the 2019 audit. At present there are no artificial sinks available to reduce carbon emisions from the atmosphere that can be seen to make a substantial impact on the deficit. Hence reduction is key to the solution!

Situations like forest fires or deforestation exasperate the situation as carbon is released from these carbon storage sinks when burnt and while deforestation reduces natural sink.

Unlike natural sink artificial sink or carbon offsetting is where companies producing products can opt to eliminate carbon they create through offset in a more influenceable industry.

Let’s look at an example to better explain this.

A company producing a medical product is concerned that through its production process, carbon is released into the atmosphere. This would be in the actual production of their product, sea-freight, road-freight, packing and distribution from warehouse to hospital. Other factors include the sales process where energy is used to power computers or fuel burnt in the cars driven by the sales people.

This carbon creation cannot be avoided under current production processes. This same company decides to offset the carbon created through an offset programme. The programme calculates the carbon released during the various stages above.

Through the carbon offset programme, offered and audited by companies who’s sole purpose is to manage these programmes, the medical company purchases carbon credits to the value of its carbon emissions. These funds are now used to implement changes in industries where change is possible through upgrades in processes and systems.

A good example would be a farmer in a third world country who burns his waste, now participates in the programme and upgrades his processes through the investment and education received. This allows him to reuse the waste or find alternatives to burning which originally created his carbon emissions.

Is carbon offsetting the silver bullet we are all looking for? The answer is no, but it is a first step in an artificial system to reduce where we can, yes!. If you are the farmer, your future is set to always contribute to the system. If you are the medical company the next step after carbon offsetting is to find better ways to bring the same products to market. But it’s a move in the right direction.

However, If the offset programme includes reforestation, then as a whole, we are moving to reduce the deficit through natural sink.

Before you produce, think about the impact and if you are unsure, speak to us!

Trying to find the remote control can be more challenging than a brand brief, and very fortunately for us the remote control was not the mission. Our job was clear, bring two enormous brands together focusing on a simple shared promotional product to enhance this very brand collaboration. 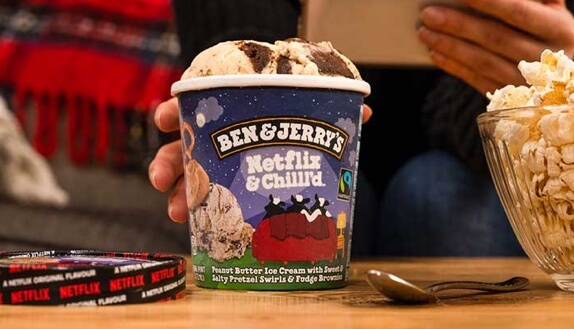 The Brief: Tight turnaround of 2 weeks. Create a product that brings Ben & Jerry’s ice cream together in a collaboration with Netflix.

Mission Obstacle B: Timeframe to activation.

Solution: Make a product that is fairly inexpensive, but that can be used while enjoying Ben & Jerry’s Netflix range of ice cream and yes this includes some rather mind bending flavours. Like their “Peanut Butter Ice Cream with Sweet & Salty Pretzel Swirls & Fudge Brownie”

Time to Moooo've (sorry, had to do that)

Our team jumps into action by reverse engineering the key points given to us in the brief. Starting with a few basics for our project plan including but not limited to date required, ethical and environmental parameters to meet our clients expectations, cost and availability of materials for production.

Step one: Our team starts with a brainstorm session aimed at weeding out all variables and options that do not or will not meet the given criteria.

Step two: Draft out and mock-up the ideas that has made it through the screening process of step one to confirm once we have a visual product that still meets all our criteria.

Step six: Some activations require split deliveries, repacking, collating with other items or product finishing to various client requirements. This step as with the product, is fully customisable to fit wth the requirements. 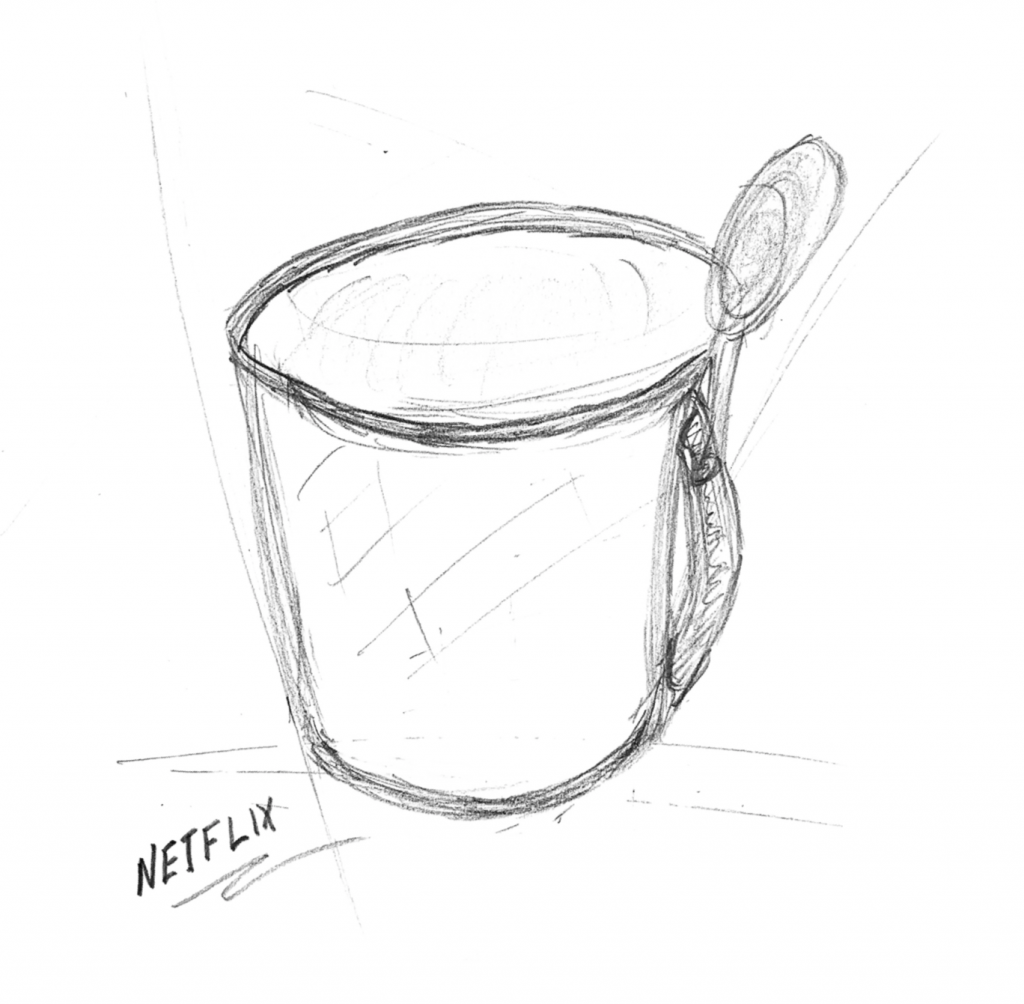 And the winner is...

Our team is very happy with the outcome of this project. With amazing feedback to a cool little product that brings brand front and centre and below budget. Just what we were trying to achieve!

No warm ice-cream, no cold hands, with your spoon right in its place and the remote firmly in the other hand, this ice cream cooler was a huge success with fantastic consumer feedback. 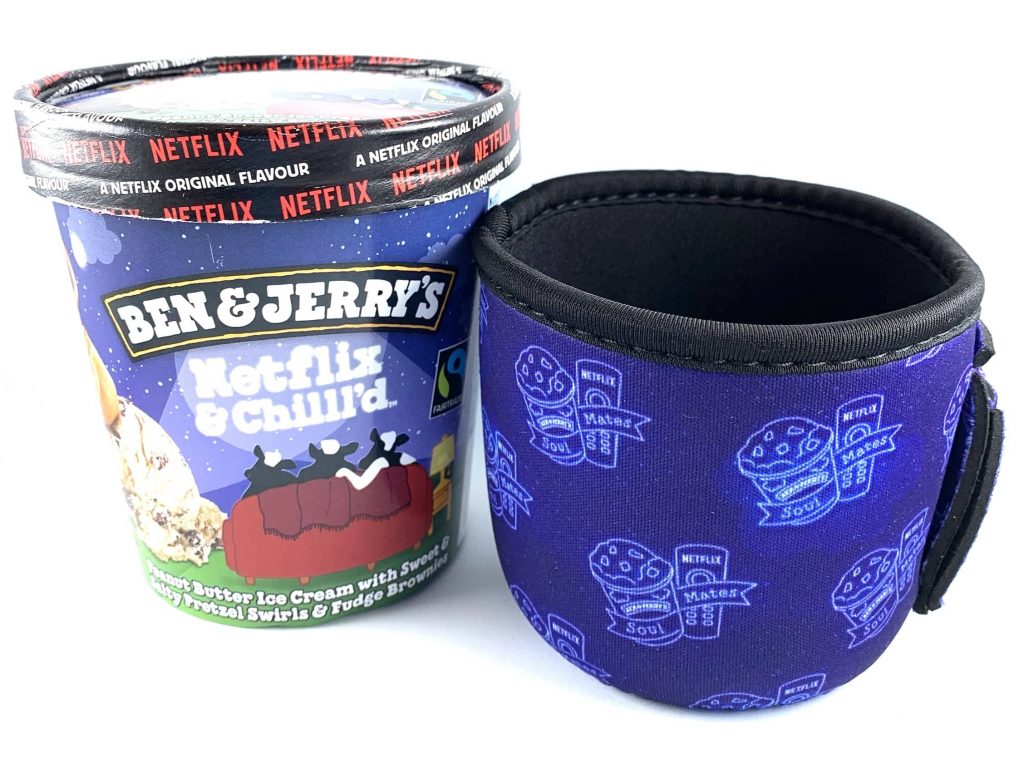 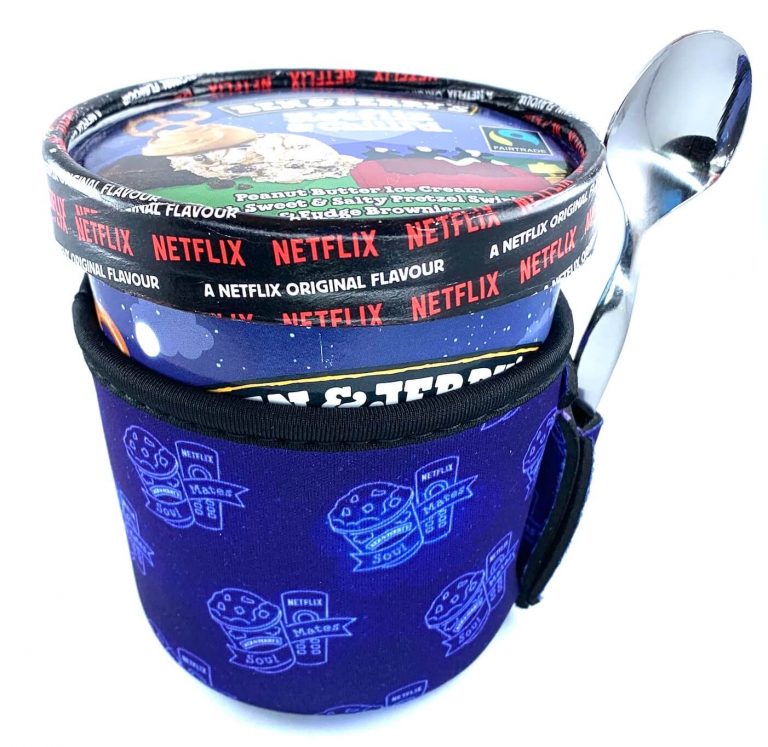 Minimum order quantities for custom products are not always the BIG issue its made out to be.

Designing and creating products from scratch by putting pen to paper is easily achievable and as you will see in this series of case studies, bringing brands to life is what we do. We look forward to any questions around this case study, and as a famous bunny once said, “That’s all folk’s”

Whether it’s a misty day as you look out over the mountains, working from the cabin or at your desk in your suburban home, you are surely to be caught in one of the lockdown or Covid19 scenario’s. Nonetheless that pressing brief or to do list needs to be addressed. And yes we all love our technology, but there comes a certain time that mapping out a plan just doesn’t feel as romantic when typing it into your iPhone 12. No, we need to scribble, erase, draw and excalmate things!!!

Yes, there’s something magical about putting pen to paper. Maybe it’s the mere fact that penning it down makes it permanent or the feeling of the pen rolling over and indenting the quality paper. We don’t think there’s one specific reason, but nevertheless notebooks form a large part of what our clients search for monthly on our website.

With such a huge variety of notebooks ranging from entry level promotional giveaways, to the ever popular and executive Moleskine™ brand of notebooks, the market extensively uses notebooks despite the surge in technology. I guess some things are just better done without a power cable.

So what is available for use in the corporate setting? Here it is important to define the purpose of the notebook, be it for staff, clients or the C-Suite Execs upstairs (or most likely at home in the current environment of Covid19)

Key aspects that should be considered when choosing that ever important purchase is;

Each of the above answers would steer you in selecting a particular brand of notebook and lets be honest, if price is an issue I can assure you there is an option available for you. The mere word “Promotional” sparked fear into any marketing professional at one or other stage, however by collaborating with a relationship driven supplier, you are sure to leave with a quality product suited to your marketing campaign and needs.

Diving a bit deeper into what makes a quality corporate or promotional notebook, let’s look a little closer at the Moleskine™ brand and a personal favourite. The bottom line is really quality and this is the type of promotional notebook I would give to top tier clients. Don’t be confused though, Moleskine™ is not the skin of a mole. Yes, thats what you were thinking and so did I at one stage, so don’t feel bad. Moleskine (Italian pronunciation: [moleˈskiːne]) is an Italian manufacturer, papermaker and product designer founded in 1997 by Francesco Franceschi, based in Milan, Italy. The leather like finish on the soft cover option does lead one to believe that this is some type of leather, but fortunately no animals are harmed in the making of this product.

Although the price of the Moleskine™ does not shout “giveaway”, other options of promotional notebooks exist for all matter of event or office use, ranging from very cheap to cost effective offering great quality. This means you can give them away in mass to promote and market you business at a fair or expo, use them at conferences for clients to note-take or internal office and staff use.

Notebooks come in both;

The last category of notebook is the fully custom and bespoke option. This is where we make the style, colour and page count including all other features to your specifications. These notebooks are one-off designs to suit your brand and although minimum order quantities are required on this type of order, you will be pleasantly surprised to see the number is not that high.

For this and any other notebook or promotional products related question, enquiry or custom design, please speak to our friendly team. We would love to collaborate with you and your brand.